In cooperation with Frauenbad Heidelberg and Steinway & Sons

We owe thank to 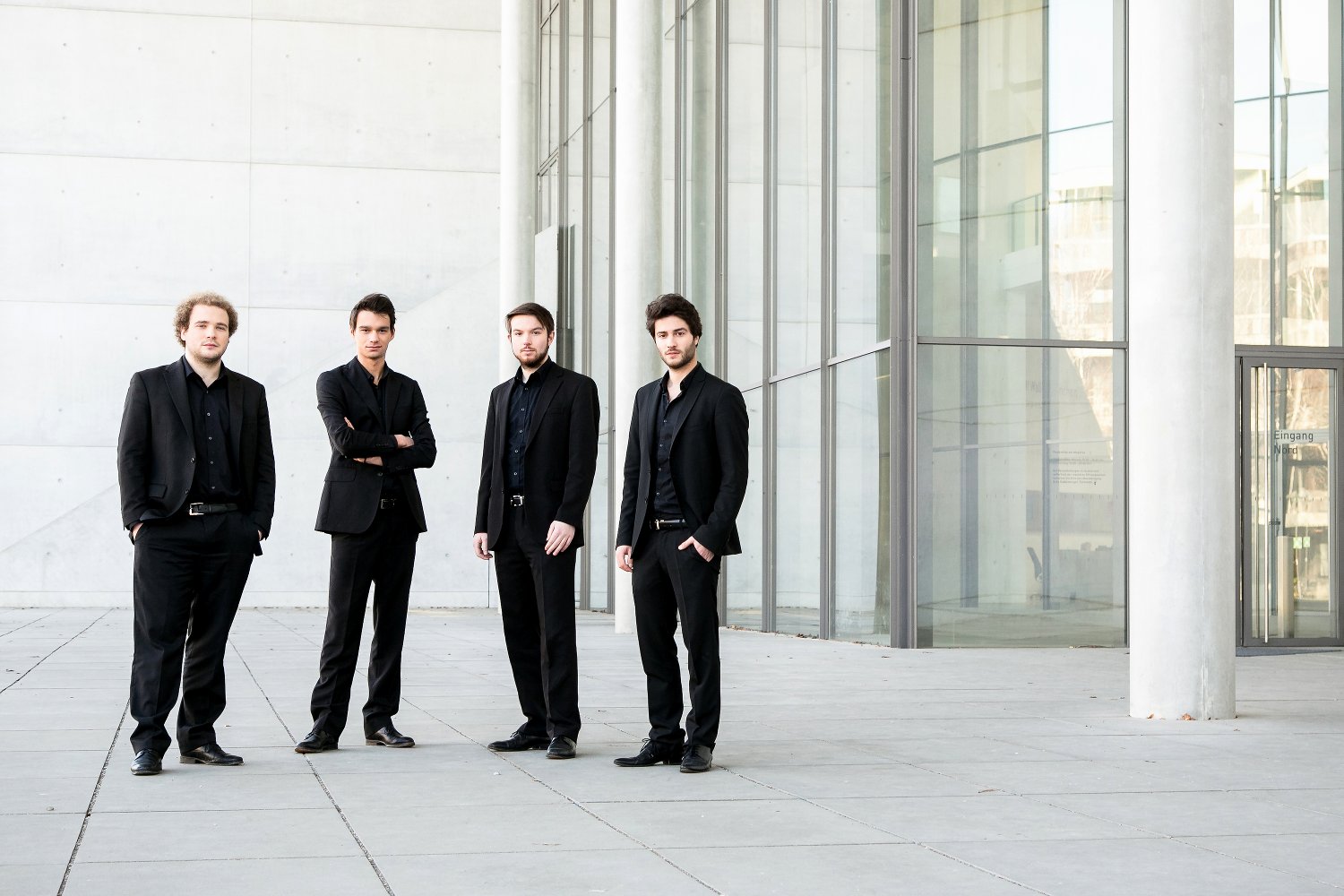 In 2014 at the age of 22 Daniel Lebhardt won 1st Prize at the Young Concert Artists auditions in Paris and New York.  A year later he was selected by Young Classical Artists Trust in London and in 2016 won the Most Promising Pianist prize at the Sydney International Competition.

Engagements during the last season included recitals at the Louvre in Paris, Wigmore Hall, Saffron Hall, the Tallinn, Oxford International and Nottingham International Piano Series.  He made his debut with the State Academic Symphony Orchestra at the White Nights Festival in St. Petersburg, and with the CBSO Youth Orchestra. Further afield he undertook tours of China, Argentina Columbia and Chile.  He continued to give recitals throughout the UK and returns to the US and Canada twice.

Born in Hungary, Daniel studied at the Franz Liszt Academy in Budapest and at the Royal Academy of Music with Pascal Nemirovski.

Lea Maria Löffler started her musical education with the violin at the age of four. One year later she discovered her love for the harp and started getting classes. Her teachers were Judith Geißler, Silke Aichhorn, Prof. Andreas Mildner and Prof. Mirjam Schröder. From 2008-2013 she studied in the Pre-college at the University of Music in Würzburg and from 2013-2016 in the Pre-college at the University of Music in Detmold, where she has been continuing her bachelor studies with Prof. Godelieve Schrama since October 2016. From 2018-2019 Lea Maria is going to study in the class of Prof. Isabelle Moretti at the Conservatoire national supérieur de musique et de danse in Paris as an Erasmus exchange student. She took part in masterclasses with Sivan Magen, Alice Giles, Marie-Pierre Langlamet and Prof. Francoise Friedrich.

In 2018, she won a scholarship at the Deutscher Musikwettbewerb and got admission to Bundesauswahl Konzerte Junger Künstler (national selection of young musical artists) as well as the special prize of the Verband der Harfenisten in Deutschland.

Furthermore, she was awarded with the Conrad von der Goltz scholarship of the University of Music in Würzburg and won special prizes of the Sparkassen NRW and the Hindemith Stiftung.

Her concerts have been broadcasted by several national radio stations such as the BR (Bavarian Broadcasting), the WDR (Westgerman Broadcasting) and the Deutschlandfunk.

The young pianist gave his first professional concerts at a very early age. At just 16 years old he was invited by the Sinfonia Varsovia to play at «Les folles journées» de Nantes and Warsaw. Since then he has played with many orchestras, such as the Kansai Philharmonic Orchestra with Augustin Dumay, the Taipei Symphony Orchestra, the Orchestre National des Pays de la Loire, the Royal Philharmonic Orchestra of Liege, and the Geneva Chamber Orchestra.

In 2015 Alexandre appeared in the opening season at the new Philharmonic Hall in Paris with the Pasdeloup Orchestra, who have invited him back to play with them again at the Salle Gaveau. In April 2016 Alexandre gave a very successful recital of Russian music at the Vuitton Foundation, where he will be returning in 2017.

Last summer he had the opportunity to indulge his love of chamber music, when he was invited to play with the Talich quartet and with Roland Pidoux. Forthcoming projects include a recording of Saint-Saens concertos for the BIS label. Alexandre also has numerous concerts lined up in Finland, South America, Italy, Spain and Switzerland. Soon to be released is a CD of Russian music, lso recorded for BIS. Since 2015 Alexandre has been a laureate of the Safran Foundation.

By winning the second prize in 68th ARD International Music Competition in Munich, 23-year-old Korean-born clarinetist Han Kim has been recognised around the world as one of the most promising clarinetists in his generation. His performance of Elliott Carter’s Clarinet Concerto with Münchner Rundfunkorchester in the final round has impressed all the jury members and captivated the audience, which led him to be awarded the audience prize in addition.

Born in 1996, Han Kim began playing the clarinet at the age of 10, and has already been recognized around the world as the most promising clarinet prodigy for his wondrous and mature playing, since his video clips of first recital were shared through Youtube and captivated world-wide audiences over 5 million times.

Han Kim has appeared many times as a soloist with a number of orchestra such as Münchner Kammerorchester, KBS symphony orchestra and Suwon Philharmonic Orchestra since his debut on year 2009 at the age of 13, playing Mozart clarinet concerto with Euro-Asian orchestra in Seoul and has been collaborated chamber music performances with many of world’s finest musicians including Arto Noras, Sabine and Wolfgang Meyer, Daniel Müller-Schott, Igor Levit, Shanghai String Quartet, Bennewitz Quartet and recent engagements include the world premiere performances of Jeajoon Ryu’s clarinet sonata, clarinet quintet, and Fuminori Tanada’s Clarinet concerto.

Han Kim is the 1st prize winner of the 3rd Jacques Lancelot International Clarinet Competition in 2016 by unanimous decision, as well as receiving the audience prize and the prize for the commissioned work. He also received numerous awards including the Jury’s special prize of the 2nd Beijing International Music Competition on 2009. He is the youngest member of Kumho Asiana Soloists and a founding member of Veits quintet, the 2nd prize-winning woodwind quintet of the 1st Carl Nielsen international chamber music competition.

He graduated Eton College in U.K and Guildhall school of Music and Drama on a scholarship with Andrew Webster. Currently he studies with Sabine Meyer at Musikhochschule Lübeck, and works as a student of Orchestra academy at Zurich Opera House. Since September 2018, he is  working as 2nd Solo Clarinettist of Finnish Radio Symphony Orchestra.

Only weeks after forming, the trio won the audience prize at the
Grachtenfestival-Concours in Amsterdam, which quickly lead to their
debut at the Royal Concertgebouw. The young, international trio has since emerged as one of the leading piano trios among the new generation, receiving enthusiastic responses from audiences and critics across the UK, Europe and Asia.

Winners of the 2015 International Parkhouse Competition in Wigmore Hall, the trio went on to win several international prizes and competitions. Most recently they were awarded 2nd prize at the International Joseph Joachim Competition in Weimar, Germany and named Dutch Classical Talent 2015/2016, giving performances in all major concert venues across the Netherlands.

In 2017, the trio had already been invited by the Heidelberger Frühling to perform at an after work concert.

His first public appearance was just at the age of six. In 2001, he joined Claire Bernard’s studio at the Lyon Conservatoire National Supérieur de Musique; he transferred to the Paris Conservatoire National Supérieur de Musique (CNSM) in 2007. There, he began studies with Boris Garlitzky.
The following years saw participation in master classes and invitations to festivals in Moulin d‘Ande, Troyes, and Bordeaux (France), Viterbo (Italy) and New Hampshire
(USA).

He won First Prize at the “International Violin Contest Henri Koch,” at the “2010 European Young Concert Artists Audition” in Leipzig, the First Prize for Violin with Special Distinction from the Jury at the CNSM Paris; the Ebel Prize (2011) he was a finalist and award-winner at the 2012 “Queen Elizabeth Competition” in Brussels, he won First Prize at the “Montreal International Musical Competition,” and was named an award-winner of the Stiftung Juventus by Georges Gara.

Alongside numerous recitals in Hamburg, at he Théâtre de la Ville de Paris, at the International Musical Olympus Festival in St. Petersburg and in Montreal, his collaborations with orchestras such as the Belgian National Orchestra,  and the Moscow Philharmonic Orchestra are becoming ever more extensive.
Marc Bouchkov is studying since October 2014 as a Young Soloist at the Kronberg Academy.