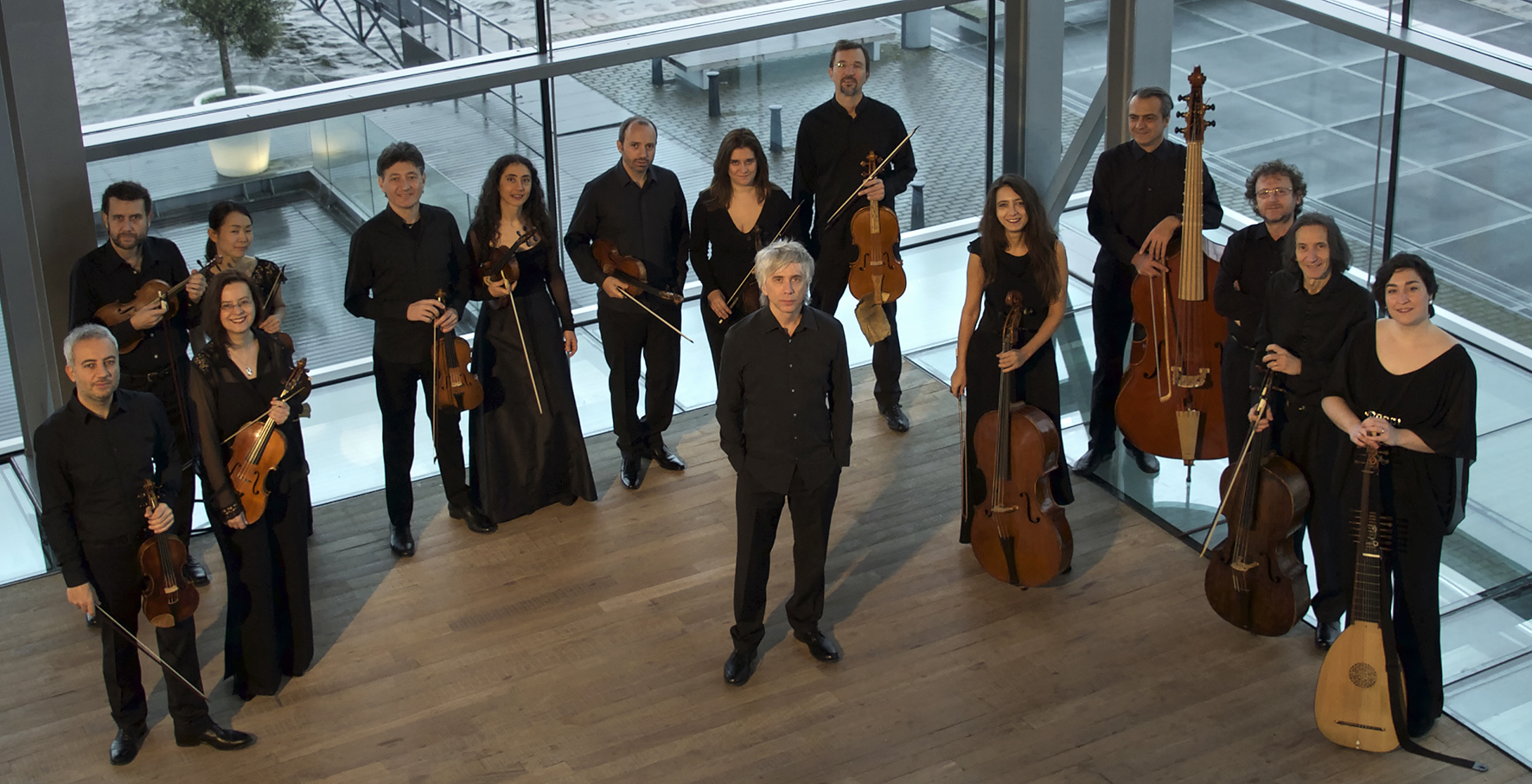 Il Giardino Armonico, founded in 1985 and conducted by Giovanni Antonini, have long been established as one of the world’s leading period instrument ensembles, bringing together musicians from some of Europe’s leading music institutions. The ensemble’s repertory is mainly focused on the 17th and 18th centuries. Depending on the demands of each programme, the group will consist of anywhere from 3 to 35 musicians.

Il Giardino Armonico is regularly invited to festivals all over the world, performing in the most important concert halls, and has received the highest acclaim both for their concerts and for their staged opera productions, like Monteverdi’s »Orfeo«, Handel’s »Agrippina«, »Il Trionfo del Tempo del Disinganno« and »La Resurrezione«, Vivaldi’s »Ottone in Villa« and, most recently, Handel’s opera »Giulio Cesare«, during last editions of Salzburg Whitsun and Summer Festival.

Elisabeth Brauß, born in 1995, is regarded as one of the outstanding musicians of her generation.

She is a regular international guest at the Elbphilharmonie Hamburg, the Mariinksy Theater in St. Petersburg, the Tonhalle Zurich, the Barbican Centre in London, the Konzerthaus Berlin, the Heidelberger Frühling, the Schleswig-Holstein Musik Festival and the Festspiele Mecklenburg-Vorpommern.

As a soloist she performs with orchestras such as the hr-Sinfonieorchester, the Deutsche Kammerphilharmonie Bremen, the NDR Radiophilharmonie Hannover, the Dortmunder Symphoniker and the Bochum Symphoniker.

In August 2013, she won the main and audience prizes at the TONALi Grand Prix in Hamburg. In 2015 she won first prize at the “Ton und Erklärung” competition in Frankfurt, and in October 2016 she won the Kissinger KlavierOlymp in Bad Kissingen.

In May 2017, her debut CD with works by Beethoven, Pr okofiev, Chopin and Denhoff was released by OehmsClassics, which was among others awarded an “Editor´s choice” by the Gramophone Magazine.

At the age of 6 she began to learn the piano with Dr. Elena Levit, from 2007 to 2010 she was a student at the Institute for Early Encouragement of Musically Highly Gifted Students of the Hochschule für Musik, Theater und Medien Hannover. From 2008 to 2010 she was a student in Hannover in the piano classes of Dr. Elena Levit and Prof. Matti Raekallio, since 2010 she studies at the HMTMH in the piano class of Prof. Bernd Goetzke.

In 2016 Elisabeth Brauß was a scholarship holder of the Chamber Music Academy and returned in 2017 and 2018 as a fellow. In 2019 will be performing again in the festival.

Founded in 1996, the casalQuartet’s formal training took place under the watchful eyes of the Carmina Quartet in Zurich, the Alban Berg in Cologne and Walter Levin in Basel.

Immediacy with its audiences, the integration of colleagues from other artistic disciplines, and concept oriented programming are all equally important to the quartet’s vision – which it promulgates at its three festivals in Switzerland. The four musicians see the string quartet as one of the most versatile genres in music, equally successful in its journeys to the 17th century, to Tango Nuevo, jazz and the newest works of today, and well adapted to extending previous programming boundaries by the inclusion of theatre, dance and literature.

Having performed at the Heidelberger Frühling in 2016, David Fray comes back in 2018. Described as “Perhaps the most inspired, certainly the most original Bach player of his generation,” he maintains an active career as a recitalist, soloist and chamber musician worldwide. He has collaborated with leading orchestras and distinguished conductors such as Pierre Boulez, Semyon Bychkov, Christoph Eschenbach, Paavo Järvi , Kurt Masur, Riccardo Muti, Esa-Pekka Salonen and Yannick Nézet-Séguin. Orchestral highlights in Europe have included performances with the London Philharmonic, Royal Concertgebouw, Bayerische Rundfunk, Deutsche Kammerphilharmonie Bremen, Deutsches Sinfonie Orchester, Mozarteum Salzburg, Orchestra del Teatro alla Scala, Orchestre de Paris, Orchestre National de France and Orchestre de l’Opéra national de Paris. David Fray made his US debut in 2009 with the Cleveland Orchestra which was followed by performances with the Boston Symphony, San Francisco Symphony, New York Philharmonic, Chicago Symphony and the Los Angeles Philharmonic. Recital debuts followed in Carnegie Hall, at the Mostly Mozart Festival in New York and the Chicago Symphony Hall.

Mr. Fray holds multiple awards including the prestigious German ECHO Klassik Prize for Instrumentalist of the Year and the Young Talent Award from the Ruhr Piano Festival. In 2008 he was named Newcomer of the Year by the BBC Music Magazine. At the 2004 Montreal International Music Competition, Mr. Fray received both the Second Grand Prize and the Prize for the best interpretation of a Canadian work.

An exclusive Warner Classics artist, David Fray recorded his first CD with works of Bach and Boulez to great critical acclaim. The disc was praised as the “best record of the year” by the London Times and Le Soir.

David Fray started taking piano lessons at the age of four. He furthered his studies with Jacques Rouvier at the National Superior Conservatory of Music in Paris where he currently resides.

The tenor from Hall in Tyrol was trained by Brigitte Fassbaender. He was introduced to the world of music and trained from a young age as a treble by Howard Arman. In 2004 he won First Prize at the Austrian state competition prima la musica, and in 2007 he was awarded the Eberhard-Wächter Medal of the Vienna State Opera, aged only 23. He stepped up his singing studies with master courses under Robert Holl; his work with Brigitte Fassbaender was formative for the start of his career.

Since the season of 2011/2012 he is member of the Frankfurt ensemble. In early 2014 he performed in the Frankfurt Opera for the first time in a Verdi opera as Fenton in Falstaff (Director: Keith Warner, Conductor: Bertrand de Billy) and in April added Don Ottavio in a new production of Don Giovanni by Christof Loy a further Mozart part to his repertoire. In this role he will also make his debut end of 2016 in Vienna´s Theater an der Wien. Following his debut at the Salzburger Festspiele 2012 as Brighella in Richard Strauss’s Ariadne auf Naxos directed by Daniel Harding, he was a guest there again in summer 2013, this time as Ferrando in Sven Eric Bechtolf’s new production of Così fan tutte, with Christoph Eschenbach on the rostrum.

Undoubtedly the focus of his singing lies in opera, but Martin Mitterrutzner possesses a broad concert repertoire, reaching from Early Music, via Bach and Handel, to modern times with works by Benjamin Britten and Sven David Sandström.

Also as a Lied singer the young tenor already managed to achieve an excellent reputation. Following recitals in Eppan, Mecklenburg-Vorpommern Festival, Eppaner Liedsommer as well as at Wilhelmshöher Schlosskonzerte he first time performed with Gerold Huber at Liederabende at the Frankfurt Opera and in the Cologne Philharmonic Hall. In the season of 2015/2016 the duo will perform at Heidelberg Spring Festival and at Schubertiade Schwarzenberg.

Called “an unquestioned master of the violin” (American Record Guide) who “rises above her competition” (Fanfare), Tianwa Yang has quickly established herself as a leading international performer and recording artist. The young violinist, a resident of Germany and heralded by the Detroit News as “the most important violinist to come on the scene in many a year”, has debuted with such major orchestras as the Detroit, Seattle, Baltimore Symphony Orchestra in addition to the BBC Philharmonic, Royal Liverpool Philharmonic, MDR Radio Symphony Leipzig, SWR Symphony Baden-Baden and Freiburg, German Radio Philharmonic, Bavarian State Opera Orchestra and Orchestre Philharmonique de Strasbourg.

As a critically acclaimed recording artist for Naxos, Tianwa Yang released the complete solo sonatas by Eugène Ysaÿe, which immediately won several awards, and both Mendelssohn violin concertos, earning her the title “one of the best new violinists of the new century” by Musicweb-International.

Raised in the Chinese capital city, Tianwa Yang began studying violin at the age of four. Demonstrating unquestionable ability, she won six competitions as a young child. At the age of ten she was accepted to study at the Central Conservatory of Music in Beijing as a student of Lin Yaoji. Tianwa Yang recorded the 24 Paganini Caprices at the age of thirteen, making her the youngest artist to release the works. In 2003 she was awarded a scholarship by the German Academic Exchange Service to study chamber music in Germany, marking the beginning of her European career.

She is grateful to Lin Yaoji, Jörg-Wolfgang Jahn and Anner Bylsma for the musical insight and support they have offered throughout her career.