The family concert with Elbtonal Percussion ensemble is going to be a trip around the world through the means of music. Different rhythms and musical traditions from other countries and cultures will be explored – as well as new and unusual ways to produce sounds with items from the household and everyday life. (from age six)

In cooperation with
Pädagogischen Hochschule Heidelberg

Different nationalities, different languages, different ages – exactly as the name reads. ‘This’ and ‘That’ describes the situations this quartet of percussionists encounter in their artistic practice.

It began perhaps with percussion repertoire, but evolved to multi-media performances like the “Beleuchtend” project, and found yet another a style leaning towards theater, from installation concerts with Jürg Frey and Michael Pisaro to a collaborative concert series (Flattersound) pointing to the creative, yet fluctuating interests of four twenty-first-century performers.

Possibly the best multi-percussionist of the world, Martin Grubinger possesses an unusually broad repertoire ranging from solo works and chamber music with partners including his own Percussive Planet Ensemble, to percussion concertos. His technical perfection, enthusiasm and musical versatility make his performances to real ‘must-see’ events and brought the percussion from the back of an orchestra to the middle of the stage.

Amongst the growing number of works written for Grubinger are Avner Dorman’s Frozen in Time (2007) and Friedrich Cerha’s Concerto (2008), performed and recorded with the Wiener Philharmoniker conducted by Peter Eötvös on Kairos, as well as Tan Dun’s concerto, Tears of Nature (2012). Spring 2014 saw the German premiere of Eötvös’ Speaking Drums with the Mahler Chamber Orchestra conducted by the composer. 2018/19 sees world premieres of new percussion concertos dedicated to Martin Grubinger by Fazil Say and Daníel Bjarnason. His renowned percussion projects such as The Percussive Planet, Century of Percussion and Caribbean Showdown are further examples of his versatility.

Winner of multiple prizes, Martin Grubinger is recipient of the Bernstein Award by the Schleswig Holstein Musik Festival and the prestigious Jeunesses Musicales’ Würth Prize. Grubinger’s first CD, Drums ‘n’ Chant, was followed by a live DVD recording of The Percussive Planet – both for Deutsche Grammophon. He has since recorded a number of projects for various labels.

Born in Salzburg, Martin Grubinger studied at the Bruckner Conservatory in Linz and at the Salzburg Mozarteum. He quickly garnered attention through appearances at several international competitions, including the second World Marimbaphone Competition in Okaya, Japan, and at the EBU Competition in Norway. Martin Grubinger holds teaching positions at Zurich University of the Arts and as Professor for Multipercussion at the University of Music and Dramatic Arts Mozarteum Salzburg.

The four precise and unerring Hamburg percussionists master the creative crossover of classical, jazz and world music better than perhaps any other band in the country. With their visually impressive range of instruments – so to speak an aesthetic sound massive of drums, cymbals and gongs from all over the world, harmoniously enriched by marimba and vibraphone – Elbtonal Percussion enthuses its audiences with their exciting dynamism and diversity of style, as already convincingly demonstrated on nine CDs and two DVDs.

The group has performed as guests on many more albums and compilations. Their breath-taking, precise virtuoso “sound scenarios that shine in new colours again and again” (Hamburger Morgenpost), transform the concert venue into a unique adventure space. Sometimes we are surrounded by something that almost invokes the magic of an archaic ritual, sometimes by the fanciful concentration of an experimental “sound laboratory”.

Elbtonal Percussion has been touring since 1996, has performed over 1,000 concerts, and has been invited to play at numerous renowned festivals (incl. Schleswig-Holstein Music Festival, Lower Saxony Music Festival, Stuttgart International Music Festival & JazzBaltica). Concert tours have taken them throughout Europe and repeatedly to Asia, such as to China’s biggest percussion festival at the National Theatre in Beijing and to Shanghai, where they were cultural ambassadors for Hamburg at Expo 2010.

Their individual and unconventional sound aesthetics are what so often drive other artists to seek collaborations with them. These include such artists as the marimba virtuoso Keiko Abé, the group Quadro Nuevo, Stewart Copeland (of The Police fame), Indian drummer & percussionist Trilok Gurtu, drummer Benny Greb, actor and dubbing artist Christian Brückner, and John Neumeier and his Hamburg Ballet.

The percussionist Johannes Fischer was the winner of the 1st prize, the audience prize and three special prizes of the International ARD Music Competition in Munich 2007. Since then he is having a busy concert schedule as soloist with orchestras and as chamber musician in venues like the Musik­verein Wien, the Berlin Philharmonic Hall, Carnegie’s Zankel Hall in New York and at numerous music festival throughout Europe, Asia and North America. He has been working with conductors and composers such as Heinz Holliger, Harrison Birtwhistle, Kirill Petrenko, Peter Eötvös and Pierre Boulez.
As percussionist and also as composer Johannes Fischer has been awarded several prizes and has received commissions, e.g. from the Crested Butte Music Festival USA, the Louvre Paris and the Lucerne Festival Academy. His works are being played in Germany, Switzerland, Ukraine, the US and Korea.
Born in 1981, Johannes Fischer studied at the Freiburg University of Music with Bernhard Wulff, Tajiro Miyazaki and Pascal Pons from 2000 to 2008. He was artist-in-residence at the University of California San Diego in 2007 in order to work with Steven Schick. Additionally, he has been pursuing extensive studies in conducting with Francis Travis and in composition with Dieter Mack. He has been professor of percussion at the Luebeck College of Music since 2009. 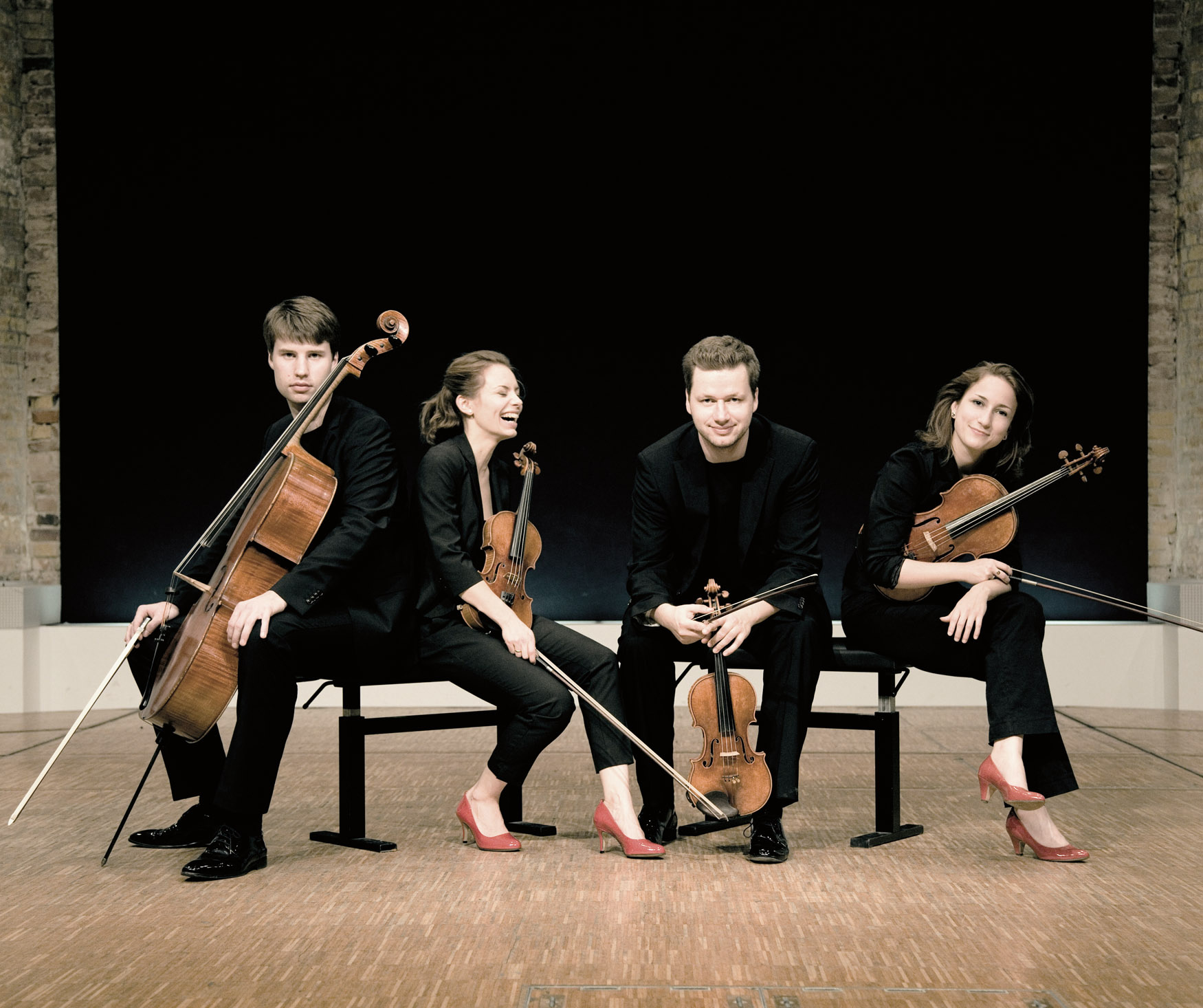 Combining a string quartet with a percussionist may appear rather unconventional, not to say risqué. But signing up five musicians who caused such a stir at the ARD (German Television’s Channel One) Competition in 2007 and 2013 and putting them on stage together is about as close as you can get to a sure-fire guarantee for an intriguing and exciting concert. In parts, Beethoven’s fiercely emotional F minor quartet op. 95 sounds almost percussive and is a perfect curtain-raiser for Johannes Fischer’s suggestive “Cloud Study” composed for the 2014 ARD Competition. Alongside “Starry Night” for marimba and string quartet by Steve Martland, whose early death robbed the musical world of one of the most original British composers of his generation, the five musicians will be performing works by Erik Satie sensitively arranged for this combination by Johannes Fischer.

Jörg Tröger in an interview with Martin Funda – Armida Quartett

As every singer knows, the human body is one big sounding board. Less well known is the fact that it can also produce exciting rhythms and noises, a feature that the three Danish percussionists of the Body Rhythm Factory turn to splendid account in their performances. Clapping, stamping, finger-snipping, teeth sucking – the whole room turns into sound and everyone has a hand (or some other body part) in the proceedings. For many years, Peter Stravrum was part of that hardy world-tour perennial, the STOMP company. Then he went back to his Danish home to establish the Body Rhythm Factory with his compatriot Rune Thorsteinsson. Success was not long in coming. Over 400 concerts at home and abroad plus the International Young Audiences Music Award 2013 for the best production worldwide for children and adolescents tell us one thing for sure: they have rhythm in the blood! (6 years and older)

In cooperation with the University of Education Heidelberg